- Explore the roots of writing and painting tools in history — 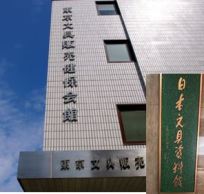 Asakusa-bashi, Tokyo, so I visited there recently in my curiosity. Name of this museum is “Japan Stationary Museum”, where the variety of historic goods for the business and educational use are collected and exhibited in global scale. This facility is proud of huge collection of ancient writing tools and its historic documents, such as variety of Chinese and Japanese brushes and ink-stones, precious pencils old and new, fountain pens, and others. We 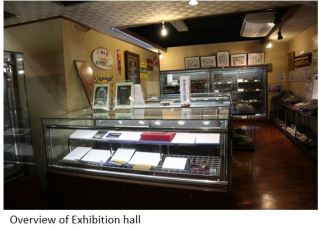 can also see the many type of calculators and typewriters there too.
It is a bit small and casual type of

museum, but I’m impressed that the contents of the collection are surprisingly excellent and superb. So these exhibitions could make us aware of how our species have been cultivating the technology of “Recording and Documenting” for expanding our social activities.
Here I summarized features of the museum, and briefly introduced the development of writing instruments in my view.
日本文具資料HP： http://www.nihon-bungu-shiryoukan.com/02.html

The Museum was established in 1980 at the Yanagibashi,

s in Tokyo under the collaboration of the leading stationery production companies. And after opening it has expanded function in 2004 by adding the collections of former “Stationery Science Hall” which was located in Azabu, Tokyo. 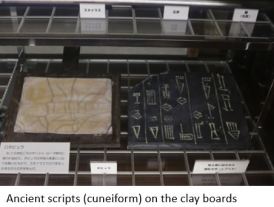 The Museum exhibits precious historic instruments with extensive commentaries, such as ancient scripts (cuneiform) on the clay boards, old pens called stylus, medieval feather pens, in addition to the graphite writing instrument which became the original form of pencils. And as a rare collection, we can see the first pencils in Japan which introduced in Japan in 16th century and owned by Date Masamune and Tokugawa Ieyasu, a 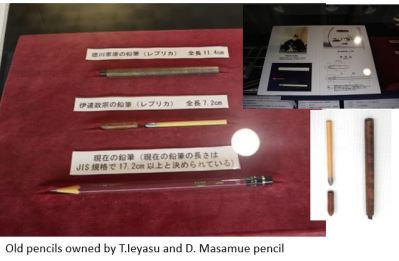 famous historical figure in the medieval period of Japan. (The exhibits in the museum are unfortunately replicas though. The Ieyasu’s original on is treasured in Toshogu-Kunosan Shrine)

It is also interesting to see the collections of traditional Chinese and Japanese old brushes and ink-stones. The exhibited these writing instruments are

In addition to the writing instruments, they are showing transitions of typewriters and computing tools too as major exhibits. The visitors can notice there the traits of development from abacus, manual calculates to electric calculators, and the evolution of typewriters from manual to electric ones, and word processor and PC in the exhibition.

♣  Pencils and their evolution seen in the exhibition

carbon) and a wooden shaft wrapped it. Before the pencil was born, people had used lead and coal for writing, and they were called the “lead brass” (lead pencil). This original form was invented in England in the 16th century, where the bare graphite crystals from the mice vein were used with simply wrapping them by threads or wires. In the medieval ages, stylus tool, reed pen, feather pen were

commonly used as writing tool, but because of its convenience the pencil writing has gradually spread and it became popular tools. Around this period, the Ieyasu’s pencil is said to be imported via the Netherlands.

Regarding the technical development of pencils, the invention of “Conte method” by a French painter, in which graphite is mixed in clay and baked at high temperature, is important. It is said that pencil industry was consolidated by this technology advancement and the mass production led by this method.

After that, the pencil was popularized as a convenient stationery tool in the world. Particularly the establishment of the stationery companies, like Tedlar and Farber in Germany, has reinforced this trend.

In Japan, after the Meiji era, several companies, such as Mazaki Pencil (now Mitsubishi Pencil) and Tombo Pencil were established and contributed to the diffusion of writing tools particularly for the school education.
The Museum displays the abundant sample products of pencil with commentary on their

development history as well as the manufacturing process of them. Then, the substantial knowledge on the pencils and other writing instruments could be available by visiting. And also the visitors could realize how variety and multiple purpose pencils are existed in the world.

♣  Chinese and Japanese Brush culture in the Exhibition

In Japan and China, brush and China-black ink have been widely used as essential instruments for writings and canvas paintings from the early

time. The origin wasn’t so clear, but some say it could be back to the fourth century BC in China, just before the Yin or Zhou period. In Japan, the oldest record of brush, named as “Tenpyo brush”, was used for copying Buddhist texts in the period of 7th century. This replica is 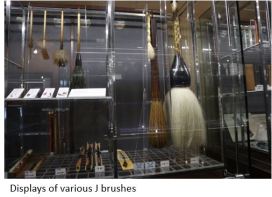 exhibited in the museum. After that period, brush type of writing instrument has become widely spread for the purpose of writing letters, government instructions, documents, poet descriptions and other purposes. besides paintings. 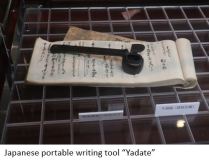 In the Edo period, even portable convenient writing tools “Yadate” which combines brush and ink as a set was invented for letter writing and other purposes on the road. The museum displays abundant “Yadate” collections which were used as popular writing 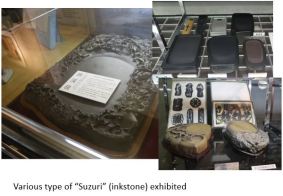 tools as well as aesthetic ornaments at that time.
The exhibition of old inks tones is also superb and it seems that these should be prized as a preferable artistic goods in upper class society, not only as a mere writing tool.

♣  Pen’s history and exhibition of fountain pen in the Museum

The museum is proud of rich collection of historic writing tools “pen” too. It is known that feather pens were used as a writing tool for long time in Western Europe from the ancient period. But there was a drawback that its tip is easily wearing. For this reason,

the development of durable tip using metal had been experimented for long time. In this process, the first metallic pen was created in the 1780s by adding crack on the metal tip. Then, in the 1800’s the full-fledged practical metal pens were finally born.

In the meantime, in 1809, UK’s Frederic B. Forsch invented a system to store ink in the pen’s body applying the air exchange function. This is the 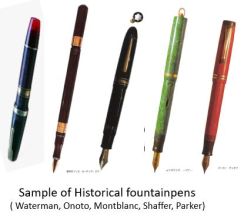 origin of so called “Fountain pen” and later this function became a license product which allowed to enter many manufacturers in this field.

During this period, Waterman launched the business in fountain pen in 1884, and Onto, Parker, Pelican, Mont Blanc, etc. were followed suite one after another.  These fountain pen manufacturers are still continuing their businesses until now as major stationery makers.

After that, the refinement of ink, improvement of its suction, replenishment system, and other technology advancement have been continued.  As a result, now the fountain pen has become one of the most popular and major practical writing tools.

For the collection all in the museum, the feather pens, primitive metal pens, precious historic fountain pens and other collections were lined up on the display shelves with the real ones, replicas, and photographs. Then visitors can fully examine the development history of pen and fountain pen there.

The first introduction of fountain pen in Japan was in 1895 of Meiji period, when the Maruzen Co. imported several fountain pens for sale. Later, the domestic pen makers attempted to start the fountain making businesses. For example, Sailor in 1911, Pilot in 1916, Platina in 1919. It is interesting to see these sample of historic fountain pens made by

Japanese manufacturers and know the development of stationery companies of Japan in this field.
In addition, Japan’s original “Makie Fountain Pens” (aesthetic lacquer-coated fountain pen) as high-class preference goods were excellent exhibition too.

♣  Other office equipment and stationery exhibits

Beside writing instruments, the museum displays computing tools, light printing machines, typewriters and other office instruments too. They exhibited various calculation tools, like Japanese and Chinese abacuses old and new, many types of calculators from manual to electric and digital ones, “Dentaku “calculators, and so on. We can understand well about transition of tools and machines used for essential means of science, technology and business of calculation.

Typewriters are indispensable means for making documents in modern society, but 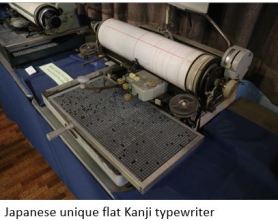 in Japan they had to step on their own development way because they should handle more than 2000 Kanji characters. So, the unique Japanese typewriters were produced and used until the 1960s. This typewriter was the form of the “Flatly arranged Kanji-plate” typewriters. This was used until the “kana-kanji”

conversion by PC was born in Japan. It is interesting that this original form of ” Kanji-plate” typewriters are displayed in parallel with many Western type typewriters. It seems these exhibitions are really making us feel how the evolution of office equipment were happened in the business scene.

The exhibition of the paper knife was also fun. Paper knife is said to be widely used in Europe and the United States, and it has been appreciated as a practical but artistic decoration tool. In the exhibition, numerous paper knives from all over the world are lining up on the shelf, and it is interesting that they are showing their own national characteristics.

Visitors could also find some unusual exhibitions in the museum too. They are “super-large brush” made from 50 horse’s tail hair, a “cash register” in the Meiji era, Karakami woodblocks used in the Edo period, large crystal seals, gold seal imprints of King Alan King and others. These looked priceless collection to us.

♣  Remarks after the visit 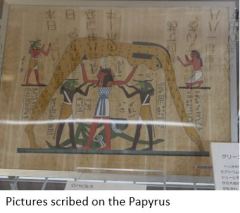 hand of the Association of Stationery Makers’, I’ve got impressed much about the collection which was excellent also very rich in contents.       It shows us how human being has developed writing instruments as the means of social communication and civilization in history.    I recalled that it was a valuable museum which makes us feel that “stationery”

is an important and indispensable tool for our society and promotion of culture, historically as well as practically.
The museum guide describes that the stationery, particularly writing instrument, is the “means to shape culture”. I was aware of it while visiting the museum.     I’d like to visit again with a new point of view in thinking “culture” of writing tools and other stationarys.