There is a unique facility named “Odaira Memorial Museum” in Hitachi City, Ibaraki

Prefecture to commemorate Namihei Odaira, a founder of Hitachi Ltd. The museum was established in 1955 to acknowledge his great contribution to Hitachi development.  In late November, I had a chance to visit this museum.  Although the visit itself  was restricted under the corona pandemic, the staff kindly guided me to this valuable facility.  The Museum is 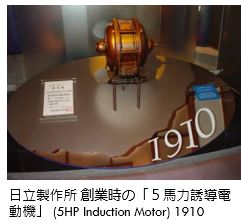 extensively tracing the Odaira’s personal life and work in Hitachi, as well as development process of company Hitachi as a whole. Odaira is well known as a creative engineer who built the electric motor for the first time in Japan and as great entrepreneur led the Hitachi’s longtime advancement of electric technology. The museum exhibition vividly describes how the electric technology had been cultivated by Odaira and how his manufacturing spirit was formed during the infant period of Japanese electric industries.

The museum hall is divided into majorly four sections, in order. The first comes a memory of Odaira’s personal life and work as an engineer, the second is the Odaira’s social contribution to the Hitachi township, the third part introduces the technology and products which Hitachi’s cultivated, and finally goes on to the reconstructed “Initial Workshop ” where Odaira had completed Japan’s first electric motor.  I’d like to briefly introduce the contents of its exhibition and to trace of Namihei Odaira’s life, as well as the history of Hitachi Ltd itself.  For the information, it should be noted that “Odaira Memorial Museum ” is going to close next year, and will be relocated to a special park in the Hitachi city.

♣ Exhibition of “Odaira Memorial Museum” and its “Initial Workshop”

The memorial museum comprises of two-story buildings. The first exhibition corner is allocated 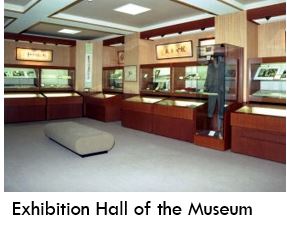 for Odaira’s memorial goods and materials which show his contribution to the company and local city of Hitachi along with his personal life.   First, the stature of Odaira is found at the entrance of the exhibition room, and many relics, chronology, photographs are followingly displayed to show Odaira’s dynamic working life. The numerous documents and memorials which are associated with Hitachi’s initial development and evolution process are exhibited there too.

At the next corner, a number of machines produced by Hitachi are displayed to demonstrate its technology challenges and advancement. Among them, the most impressive product would be the exhibit of real “Electric motor” (5-horsepower induction motor) that Odaira had built with his hand in the 1910s.  This might be the first product to indicate that Japan had just started to be having the essential power of building electrical machines in the situation where almost all the electrical machinery had to import and its

technology had completely relied on foreign engineers.  It’s possible to say that was a memorable step for building electric industries in Japan.

The “Initial Workshop ” is located at the Hitachi factory

compound. This facility is the old work mill initiated by Odaira which was restored by Hitachi’s engineers who had engaged in the production of machines at that time.  Inside the workshop, many humble machine tools are placed that was used for manufacturing the first motor in Japan. These remains clearly show how painfully tough it would be to build the machine under poor working conditions.

Regarding the Odaira’s personal life as an engineer is described well in this museum too by using photographs, university records, chronology. These exhibits are indicating how he mastered new technology and obtain the enough competence as an engineer & entrepreneur, along with showing his turbulent life in the business and engineering works.

The exhibition on the Odaira’s contribution to the

technology building of Hitachi and for  Japanese electrical industry development is also explained in detail at the memorial museum, as well as its involvement to the local community development in Hitachi City where Odaira lived and worked.

♣ Odaira’s challenge and development of Hitachi seen in the exhibition

It would be useful  to touch on the Odaira’s life and work through the view on the exhibition associated with his footprints and development of Hitachi.

Namihei Odaira was born in Shimotsuga, Tochigi Prefecture in 1874. He entered Tokyo University and majored in the course of Electrical Department.  After graduation he joined “Fujita Gumi Kosaka Mine” as a Chief Electrical Engineer and involved in the power plant project there.  However, soon he had to feel disappointed as he saw the reality that Japanese electrical machinery was completely relied on foreign technology. Then Odaira had begun to have 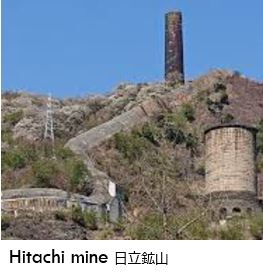 strong desire of building the electric machines using domestic technology by his hands.   This idea was intensified further by the passionate support from his university friend Motoji Shibusawa (a nephew of Eiichi Shibusawa, a famous business leader in the Maiji period.)
Then Odaira moved to the “Hitachi Mine” run by Fusanosuke Kuhara in 1906 (Meiji 39) thanks to Shibusawa, and began to be engaging in the electrical machinery development with 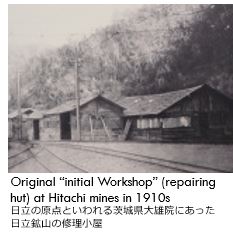 holding a dream to build Japan-made electric machine there.
At the “Hitachi Mine”, while constructing power plants in Nakazato and Ishioka, he had worked fervently for development of domestic electric motors with the warm support of Kuhara. Then, finally the first domestically produced 5-horsepower motor was completed by Odaira and his colleagues. This is the memorial site of “Initial Workshop.”  Later, this Workshop was reconstructed by his followers in 1950s as one of the facilities of Memorial museum. This facility has been noted long as a cradle site of “Hitachi Ltd.” and became a kind of symbol of the advancement of the company as a whole.

After that, however, they had to face numerous difficulties. The motors produced in the company were frequently inflicted by fault 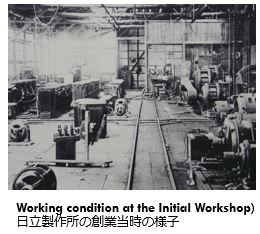 and trouble. But Odaira and his staff hadn’t given up and tried to continuously overcome the problems with little by little, and gradually the machinery production was moved upward and started being on the right track and as well as in business performance.

Then, based on the successive grow, his company decided to stage up to the independent manufacturer “Kuhara Mining Works Hitachi, Ltd” in 1911 and it became a greater “Hitachi Ltd.” Later.      It is now evaluated that the fervent working style at that time now being reflected in the Hitachi’s practical skills, innovative new products and

courageous challenge to the new technology. They are deeply rooted in the corporate culture of “Hitachi of Technology” even today. The man who consistently led and promoted this spirit was a pioneering engineer Namihei Odaira.

The results of innovative products in this early stage are reflected in many machines exhibited, such as a 275 horsepower induction motor” (“serial number one”), a rotor for a 250 kVA turbine generator, and a 10,000 horsepower Francis turbine runner.  These real machines are exhibited in the Museum together with the blueprint paper which are implicating the Hitachi’s early  early technical challenges.

Then, in 1922, the Odaira’s factory became “Hitachi Co., Ltd” which was independent entity from the “Kuhara Mining” company group.

the company was growing further as a large manufacturer in the electric company in Japan.   The driving force behind this advancement was mentioned to the excellent engineering staff gathered at Hitachi Co. and

Odaira’s strong leadership in the “Monodukuri” (manufacturing spirit).  This spirit was appeared in the publication of the in-house engineering magazine “Hitachi Review”. (At the memorial hall, booklets from this first issue to the present are exhibited)     These trajectories of Hitachi development are explained well in the museum using drawings, photographs, videos, and panels.

However, at the end of the Pacific War, Hitachi experienced enormous damage in the factory equipment, human resources and other precious

technology assets, and personnel due to the bombing by the US military. The factory in Hitachi City was completely destroyed, and lose hundreds of company staff.  This painful situation is recorded in the exhibition at the museum.  In addition, after the War, Hitachi executives were expelled from the company including Odaira,

However, from around 1948, the production began to bring back soon and it could activate again. This recovery was partly prompted by the postwar restoration policy and expanding demand from rapid infrastructure building. The private consumer 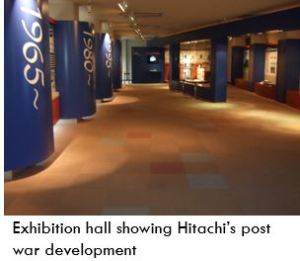 demand is also contributed by the postwar economic growth. But the real source was regarded to be the technological capabilities fostered during the past technological initiatives.  The Museum tried to exhibit this turbulent process by various chronological panels, photos, and videos, such as providing the corner of the “developing footprint” “Technology is now”, “functional explanation and technology background” and others.

<Hitachi’s growing as a leading manufacturer of electric business>

When it comes to the Hitachi’s business and technology, it could be found the further development of advanced products and high-tech equipment.  Among these it can be count several products, such as the first domestically produced large Strip

and many others. It can’t deny that Hitachi has played a significant role in the Japanese electrical industry.
In terms of corporate management, Hitachi Cable, Hitachi Metals, Hitachi Chemical, Hitachi Construction Machinery, etc. have been established to form a greater Hitachi Group and grown into a global company.  It takes also conspicuous roll to deepen cooperation with overseas manufacturers and expand overseas business networks. 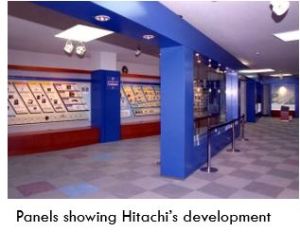 These total movements are explained in detail in the “Postwar Exhibition Zone” of the Museum by using abundant panels, videos, models, and photographs.    Looking at these exhibits, we can figure out how Hitachi have been developing and evolved the engineering technology. And with looking into the development of Hitachi, we can get some images about  the overall

movement of Japan’s electrical and infrastructure industries. And it also indicates how Japanese manufacturers are challenging now to develop advanced newly advanced electronics products and technology under the fierce international competitive situation.
The museum exhibition seems to be providing the abundant learning materials regarding electric technology, entrepreneurship, corporate manufacturing culture and Monodukuri spirit especially in the electric manufacturing industry.

Conclusion: after the visit

Honestly I could learn a lot about the company background of Hitachi, particularly manufacturing spirit created by Namihei Odaira, a founder of Hitachi by visiting the Museum.   It looks preserving uncountable evidence of the development of Japanese electric industries, including historic documents regarding initial 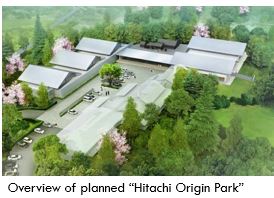 challenge of manufacturing, real products produced in the process, personal documents involved in the Hitachi projects, and especially a great contribution of Hitachi’s founder Namihei Odaira.  I felt the Hitachi’s hidden evolving history is concentrated in this museum.   According the museum information, the memorial museum is going to be closed soon and be transferred to the other site.  I hope that collections will be totally moved to the new facility and thoughtfully conveys the messages of Hitachi’s manufacturing spirits and Odaira’s contribution to the development of Japanese electric industry as a whole.  When the new museum is open, I’d like to visit again with that hope.

Note:  Most of the photographs in the text are based on the following Web materials.