I had an opportunity to visit the “Nikon Museum” in this May. The Museum was established in 2015 in commemoration of the Nikon’s 100th anniversary.  As it well known, Nikon is a leading optical ins

trument manufacturer in Japan which was launched under the name of “Nihon Kogaku Co.” a century ago. In this Museum, there the huge numbers of optical apparatus ever developed by Nikon are exhibited all at once. It’s just not only cameras,

but the other sophistication there displayed with explanation of the background of Nikon’s optical technology. By this visit I could grasp the current position of Japan’s optical equipment technology. This is my record memo at that time.

Nikon Museum is possible by Nikon’s home page, including the English version (http://www.nikon.co.jp/profile/museum/exhibitions/)

Shinagawa Intercity Complex neighboring JR Shinagawa Station. The museum is still a new as it has just opened in 2015. The exhibition is showing the plenty of successive generation of optical products developed by Nikon. The visitors can find a lot of optical instruments, not only cameras, such as the high-power microscopes, optical measuring instruments, semiconductor exposure devices there developed by Nikon.

Furthermore, the exhibition displays many objects
showing optical structure and its nature, lens and the human eye’s

recognition mechanism, and so on. The visual image of the astronomical telescopes and optical instruments, used in the semiconductor and medical field, is also observable.

Beside these exhibitions, the museum provides several spots where the visitors can touch and move the goods directly. The Museum would be a quite rare facility that could enjoy the mystery of optical technology world.

The museum is divided into several corners to give visitors enough knowledge about the works of optical technology Nikon has been explored.

Firstly, the visitors can spot the real lens gemstone of huge “Quartz Glass Ingot” in the beginning. This is said to be a material used in the semiconductor exposure apparatus. It beamed the strange light with transparent reflections in the dim hall. This object was set up as a symbol exhibit of the Museum.

To the next, the large moving screen was seen the optical astronomical and 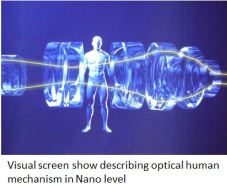 human  visual systems which is possible to manipulate by hands.

The visitors can look into the inside structure of the semiconductor and minute cells. It was really fascinating. And the other several exhibition corners are continued in the walk. The following are the explanation of major spots of the Museum.

After that, the company intensively learned from Germany of the optical pre

cision technology, particularly lens technology, and started to manufacture many binoculars, measuring instruments for the

navy in Japan. And the company gradually has been growing to a pioneer of lens and camera manufacturing. The first camera was produced in 1945 for the public under the name of “Nikon”. In this process, Nikon camera gradually became famous in 1950s after the endorsement of US professional photographers who 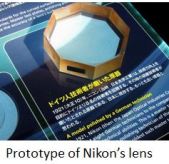 Nikon boasts the excellent ability of lens producing technology ahead of other Japanese optical makers in the history. This episode is traced in the exhibition panel there. For example, how 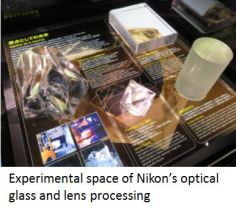 the former Nikon has developed its own lens under the name of Nikkor in 1931, and how it continued tireless efforts to improve the lens technology in the process.

In this corner, the experimental facilities are provided

for the visitor who wants to experience how Nikon lens is composed, and how its mechanism is created. The original prototype of the lens is also exhibited there for showing how it beautifully cuts, shapes, and polishes with the minute level of precision skills. This corner named as “History of Optics” and “Experiment Room of Lens”.

It is quite impressive to observe over the 450 successive models of camera from the first time product Nikon-I, which was announced in the 1941, up to the latest “D” models, in addition to the recent digital compact cameras. The “Nikon-S” model which raised the Nikon name high in the world was especially eye-catching. After that, Nikon-SP, Nikon-F, and the auto focus single-lens reflex camera Nikon-F2 was produced in the market. Even the Nikon-F3 was said to be installed in the space ship space shuttle in 1980.
.

In the digital camera field, Nikon developed, jointly with Fuji-film, a digital type of single-lens Nikon-E2 in order to adjust to the current market demand in the digital era. In addition, since 2006 Nikon has shifted the business of optical technology to the digital single-lens reflex system along the line of the digitization, and successfully produced Nikon-D series, which accommodates the camera funs.

♣  Development of the Optical Industry Equipment

Of course, the visual equipment is the Nikon’s flagship business, including a camera and 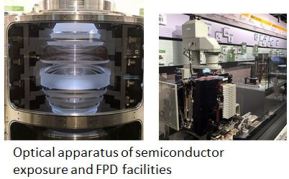 visual equipment, but Nikon’s optical products for the industrial use have accounted of heavy weight in their business. Historically, binoculars or telescope and optical measuring instrument have been demonstrating the Nikon’s technology capability since the beginning. In

addition, Nikon has engaged, from early time, in the production of specific semiconductor exposure apparatus and FPD facilities for semiconductor fabrication. These are required the ultra-fine processing technology through the fully mobilization of its optical technology. In this museum, the several samples of these devices are observable directly.

It was quite impressive to see the scientific and technical challenges carried out by Nikon.

♣  Highlights of the Museum

As mentioned above, through the introduction of

I believe the Nikon Museum would be an excellent facility for those who are interested in the optical instruments and cameras in Japan.