The Railway Museum was built as the centerpiece of the JR East 20th Anniversary Memorial Project and the historical evidence of 100 year Japanese railway technology development.

Concept of Museum
This Museum is a historical museum that tells the industrial history of the development of the railway system while introducing the historical background of each period with displays of actual models.
It is also an educational museum. People can learn about and experience railway principles, systems, and the latest technologies (including future plans) through models, simulations, and play equipment.

Many Locomotives, being active in Meiji era, are exhibited in the Museum as a visible evidence of challenging Japanese railway technology cultivation. These developments were accomplished by Japanese engineers from the early time of 1870s under the guidance of UK and US engineers.

(1) Dawn of Railways in Japan

On exhibit are carriages which were active from the end of the Meiji to Taisho era when the railway network expanded throughout the country.

(3) Starting Limited Express and Commuter Transport
On exhibit are carriages used during the golden age of railroad in the pre-World War-II.

Seeking Speed and Conformity
The advancement of AC electric technology established in the late 50s spread electrified railroads nationwide. With it came the development of trains capable of running on both AC and DC currents.

Series 0 Shinkansen
First Generation of Tokaido Shinkansen. By the appearance of “Series 0”, Japanese railway technology has become to be the world first class and won the global reputation.

Big Georama Model, (Scale 25 meter x 8meter)
The several trains and Shinkansen trains are actively running on the HO gage rail in the over 200m2 model of land scape with mountain hills, cities and villages, and forest and plains.

Driving simulator using real steam locomotive. Visitors can experience the driving technic through this simulator to operate machines, like expansion valve, Reversing gear, brake, and others. The visitors will be able to get the basic knowledge on the principles of the steam engine and movement of locomotives.

Many railway technologies are displayed here. The visitors will understand how railway system is managed and operated by observing various machines and tools.

Power Source of Electric Train
Visitors can learn the method of how electric trains receive electric power (through pantographs) and transfer it to the motor power. They are also available primary knowledge about the principles of the steam and diesel engines too.

Power Transmission Device
Visitors can learn the mechanism how the electric power is transferred to the railway wheels, and how control them by using mock models.

Luxurious artistic Royal Railway Carriages are exhibited at the historical corner as a monument.  These carriages were used by the royal families. Visitors will be impressed with their gorgeous artistic interiors which designed by the greatest artisans of the day. 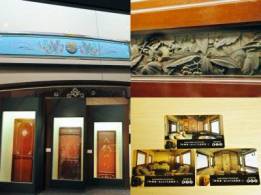 Back to the former position